With the evolution of technology in the film, television, and consumer audio industry certain capabilities have become core area’s of focus in the professional recording industry. To that end, Santa Barbara Sound Design has placed emphasis in these areas and has excelled at providing capability in the areas of ADR (automated dialog replacement) for film and television, recorded audio books, and sound design and mixing for nature film documentaries.

Santa Barbara Sound Design is the result of a journey that started in the early 1970's by Dean Thompson in Ojai, CA. After creating Two Dot Recorders in Ojai and getting a taste of what was possible in an independent recording studio, Dean purchased the building at 33 West Haley in Santa Barbara.

Along with a handful of other committed engineers and builders the facility in Santa Barbara evolved into Santa Barbara Sound over several years and eventually began recording audio around 1972-73. Several evolutions of the control room environment were needed and eventually with the guidance provided by George Augsburger the control room implemented George's compression ceiling design plan and the configuration that continued in use for over 25 years was born. The acoustic spaces for the musicians were well designed and constructed from the beginning and even to this day have required little to no modification.

Finally, in 2004, newer control room designs had evolved to support the growing trend toward much more low-end and bass in modern recordings. The control room was once again gutted and reconstructed into its present sonically stunning configuration. Numerous highly traveled artists have observed as to how they have experienced our control room as among the best listening and working environment in their professional careers.

As to equipment, technical trends that have evolved over the many years in operation have not gone ignored, and major costly investments take place each year. Under the stewardship of Dominic Camardella everything must meet stringent modern standards. To that end, hospital grade clean power electrical systems have upgraded our studio, equipment both modern and vintage must meet the utmost scrutiny in their functionality and an unforgiving attitude stating 'if a piece of gear is in the room or on the equipment list' it must work properly and offer something special and wonderful as to its handling of audio. Dom is the resident audio engineer and producer and 'audio architect' displaying his technical skills and musicianship at every juncture perhaps bordering on evangelism.

However, he knows to provide the ultimate customer service he must be willing to do whatever is needed for each and every client. Sometimes it requires just a touch of involvement to empower visiting engineers and producers and offer nothing more than advice and assistance to help them yield the best results when working at Santa Barbara Sound Design. Other times, he is an active participant in the recording and mixing process or performing on tracks as keyboard player. Whatever is required he will provide so as to create the needed vibe and environment for projects to succeed. 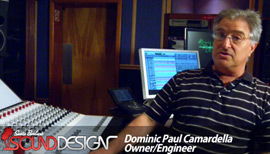 Born in Mount Vernon, New York and raised in the north Bronx, NY, Dom is a true New Yorker at heart. New Yorkers tend to 'wear their heart on their sleeves' which may seem like an overused cliché but in his case aptly describes his exuberance and passion for all things music and related to music recording and production. His motto is 'promise X and deliver at least 2X'!!!

His significant education by the Jesuits at the Fordham Prep High School on the campus of Fordham University benefitted him the opportunity to earn entry into the prestigious Massachusetts Institute of Technology. As a young musician, as early as high school he began performing in bands as a self-taught bass player although he was a trained pianist since grammar school days. It was in his basement where he first became obsessed with recorded sound. Experimenting with consumer tape recorders and Radio Shack mixing devices he devised an eight-microphone system to record his band in the family basement, much to the chagrin of his neighbors.

However, this quickly evolved his musicianship and experience with popular music of that time to the point where he was recruited by an older husband and wife musical team to join their band. By that time he had purchased his first Hammond Organ and his first professional gig followed in a bar where he was snuck in the back door and required to 'wear shades and a hat and talk to no one' and stay in the dressing room on breaks (can you say under age?!? )

Once at MIT he continued his pursuit of his formal engineering studies, eventually studying with Amar Bose of Bose speaker fame while continuing to play and record music with a new crew of people that had entered his life in Boston, MA.

It was through these new affiliations that he met up with some Harvard students and formed several new performing units that played at frat parties and the like during his university years. Continually growing his skills both technically and musically he chose to stay in the Boston area after MIT and briefly studied jazz piano and theory at Berklee College of Music.

A few years later when some of his Harvard buddies called from Isla Vista, California and suggested he migrate to California, he and his wife Joan packed up the Ford Van (the Blue Spumoni) and with their animals and keyboards headed West. Once in California several new musical alliances followed and his writing, and keyboard playing afforded him the opportunity to become a sideman for one of his early musical idols, Jim Messina. This association lasted for several years until he was eventually replaced a mere six months before the band was dissolved. However, through the Messina connection he got to record at the studio he eventually went on to own.

Once he was let go from the band and having several children by then with his wife Joan he felt the need to secure a better financial basis for his family. It was then, through the backing of his father-in-law, Frank Fanelli and a grub stake of $10K that he created one of the first microcomputer sales and service companies in the Santa Barbara area. It was timely! DataBank was well established by the time the IBM PC was introduced in 1981 and the company grew quickly. But music was still integral to his life. In the back room of the storefront, Dom implemented the early capability of connecting a computer to music keyboards and utilizing the newly developed MIDI technology he began composing using this system.

Once Santa Barbara Sound heard of his newly developed skill, they requested he bring that service to the studio and make it available to artists recording there. Within four years he became comfortable working in that environment and what is now history purchased the studio building and studio operation from Dean Thompson and Santa Barbara Sound Design was born.

Not to assume he was a full-fledged audio engineer or producer as of yet, Dom was every client's assistant in his early years as owner. Eventually clients recognized his talent and valued his participation in their projects. It was the jazz great, trumpeter Maynard Ferguson that gave him his first break, installing him as his personal engineer (and on a few projects producer) beginning a relationship that delivered over ten titles to various record labels including Concord Jazz. This relationship continued until Maynard's passing.

In the late 1980's, Dom was working with and for the growing Los Angeles record label, Higher Octave Music. Based on the pop flamenco idiom catalyzed by the European band 'The Gypsy Kings' several US artists began to follow and imitate that trend. One such artist was Ottmar Liebert that had created the seminal US version of the idiom, Nouveau Flamenco in a small studio in Santa Fe, New Mexico. Now signed to Higher Octave Music, they introduced Ottmar and his brother Stefan to Dom and a five-year multi-award team was created.

Within two years of their introduction, Dom and Ottmar completed the contract with Higher Octave, earned the first Grammy nomination for Ottmar, Dom, and Higher Octave and were recognized by Sony Music as a developing force in this idiom and were signed to Sony's Epic Records division. Based upon the added instruments Dom's producing talents and piano skills brought to the ensemble, Epic connected them with Carlos Santana for two cameo performances and concert promoters around the globe contracted the now larger ensemble and several tours followed where Dom was away from Santa Barbara Sound Design for months traveling and performing in Ottmar's Luna Negra ensemble. Dom reflects on two performances on the Jay Leno Show and travels to Australia and Mexico City as highlights of his performing career.

Film and Television and Audio books became another skill set and relationships with Jack Canfield, Fannie Flagg, TC Boyle, Rob Lowe, Kevin Costner, and Carol Burnett resulted in the Grammy award he received for Carol's book this past Spring. Applying his creativity in the new area for him of sound FX design for nature films established yet another realm to apply his skills. Several films are now in global release and he was one of three finalists for sound in a recent Jackson Hole Nature film festival losing out to Disney and the festival sponsor, Dolby Labs.

Relationships are at the heart of it and Dom is still working earnestly after all these years. Attention to detail and caring for the results he delivers for his clients are the cornerstone of these relationships. His discography keeps growing and his thirst for continued growth both technically and musically keeps open connections with every generation that makes music today. No 'one trick pony', Dom is comfortable in contemporary music, classical music, jazz, theater sound, film/television audio, well, basically 'everything audio'. His motto! Promise 'X' deliver at least '2X'!!!